ICM and other initiatives of the Accademia di Musica

The “Pinerolo e Torino – Città Metropolitana” International” Chamber Music Competition was created in 1994 thanks to the passion and planning of Laura Richaud and Giorgio Bresso, respectively artistic director and honorary president of the Accademia di Musica di Pinerolo. From its inception, the Accademia has always supported highly talented young musicians, providing them with teachers of international renown to perfect their musical training and creating pre-professional and professional opportunities for them to perform in public. For 20 years the school has been operating in Pinerolo, holding annual music courses, master classes, workshops, summer schools, concert seasons, musical events and exhibitions. Since its founding, it has organized no less than a thousand concerts and has created an orchestra and a choir. HISTORY OF THE COMPETITION

Find out how our competition has changed over more than two decades, from the original Pinerolo Città della Cavalleria contest to today’s ICM Competition. Since 1994 some of the best young musicians on the international music scene have performed in the competition, before our prestigious jury. The next International Chamber Music Competition will take place in Pinerolo and Turin from 5 to 11 March 2018.

In the field of music education, our school, the Accademia di Musica di Pinerolo, is undoubtedly considered to be one of the most important centres of advanced music training in Italy, equal in prestige to the Accademia Pianistica di Imola (dedicated to piano studies) and to the Scuola di Musica di Fiesole (which specializes in training for orchestra), different as these schools may be, given their specific artistic focus.

With the beginning of the 2019/2020 academic year the Accademia is launching its absolutely new 2-year postgraduate courses in advanced music studies – 3rd cycle qualification, recognised by the MIUR – Italian Ministry of Education in solo piano, solo piano for contemporary music, violin, viola, cello and  guitar. The first 2-year course ( 2019/21), unique in Italy, is currently in progress in Pinerolo, Torino e Banna.

The Pinerolo Academy ranks among the most respected centres of advanced musical education (university level), offering courses and masterclasses for students of piano, violin, viola, cello, orchestra and chamber music, with teachers of international renown, who generously concentrate their efforts on growing the talents of their students as the future generation of professionals.

All of our teaching methodology is student-centred, solidly based around the student and his/her needs: each teaching programme is aimed at enhancing the personal strengths and developing the skills and expressivity of each individual musician. Standard curriculum, specific personal curriculum, formative tests, performance training: all these factors are combined together, creating opportunities for enrichment, exchange and collaboration between the various strands of musical culture.

Under the guidance of our artistic director Laura Richaud, the Accademia di Musica aims to provide training that is complementary to the music education provided by the Conservatoires, and, with this goal in mind, creates teaching programmes that take into consideration our students’ needs and the skills they must develop in order to embark on a professional career in music. The most important of these initiatives is Open Source, which offers students already enrolled at the Turin Conservatoire scholarships and recognition of university credits for courses they attend at the Accademia. To complete our music education offer we have created the concert series Star*(t)up, held in the Accademia auditorium, where students perform on the same stage as their own teachers, the ideal way to pave the way towards a professional career as an international concert artist. Our teaching programme extends beyond the academic calendar: for example, with our summer school Musica d’Estate, a course of advanced music training with master classes (piano, violin, cello, chamber music, lieder repertoire and guitar, soloist/conductor rapport) taught by internationally renowned teachers, and attended by young musicians who wish to extend their repertoire and to perform in a varied and interesting series of summer concerts. 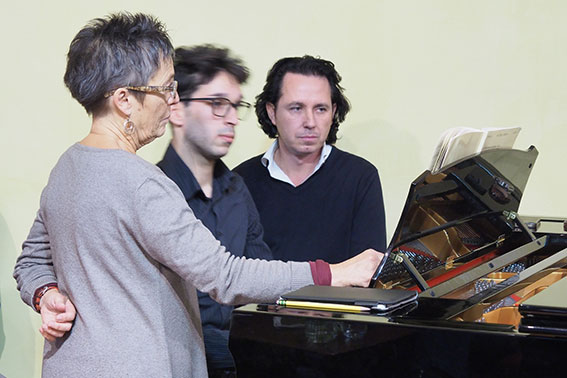 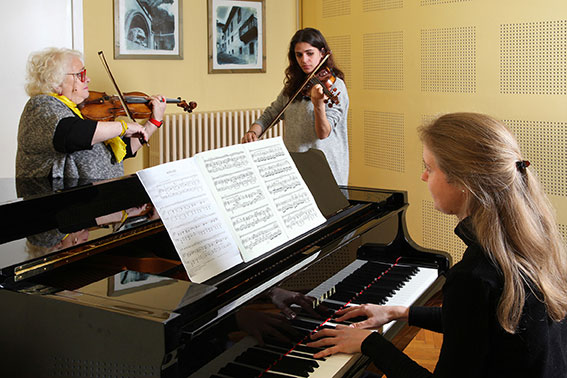 Concert Season. This season (from October to May) of around 40 concerts is held in the academy concert hall and in the Teatro Sociale di Pinerolo theatre, featuring internationally famous musicians who perform music from the classical repertoire as well as more innovative programmes. The season also offers performance opportunities for promising young musicians: appearing in the same concert series as such prominent artists cannot fail to boost their careers. Each summer for the last 16 years, the Accademia has organised a musical event in the mountain resort of Bardonecchia, Musica d’Estate: here the master classes mentioned above are accompanied by a varied and interesting series of concert, free to the public, which attracts an audience of more than 7,000 people every year.

THE ACCADEMIA LIBRARY – BOOKS AND MEDIA

Intended to function as a specialist centre supplementing existing facilities in the field of music studies, the Accademia library (books and media) aims to make all its didactic resources available to students of music in the Pinerolo-Torino area. Donations have already been made by the Pinerolo Rotary Club, the Teatro Regio opera house of Turin, by Ms. Susanna Franchi and by the Marino-Veraguez and Albinolo families. These gifts have contributed to the Library about 800 CDs, 2000 33rpm LPs, around 1500 books about music and approximately 800 scores, instrumental and orchestral, published by Henle. The Library is also home to the Dino Asciolla Foundation, in accordance with the wishes of the family of this great Italian violist, and thanks to the efforts of Maestro Danilo Rossi, his student: the collection includes instrumental and orchestral scores with the original fingering, as well as the complete record of his concert performances. In 2009 the Accademia di Musica received a further donation for the library from Ms. Lorenzoni from Turin, and in 2016 another from the Pasceri family. In the Accademia’s instrument collection, a Streicher donated by Giorgio Manfredi and a Pleyel donated by Peggy Cavallo Perin take pride of place.

The Accademia di Musica has always tried to nurture the talent of its students not only by offering excellent teaching with didactic programmes centred around the student, but also by creating a warm, friendly environment that is stimulating and engaging, where the student is followed with great attention and consideration. The artistic ability, the talent and the enthusiasm of the Accademia’s students have found their natural expression in the formation of this orchestra. The young musicians taking part in the orchestra project are united in their intentions: to strive for excellence in preparing the programmes, to create a group of the highest quality, to develop the talent of each individual member in order to form an ensemble of great artistic value. The orchestral work is complementary to the entire course of study, which, naturally, involves the analysis and perfecting of the soloist’s repertoire. What the orchestra provides is the exchange and the educational experience of playing as part of a group.

Most members of the Orchestra (students and ex-students) are already members of important established orchestras, chamber music ensembles and orchestra ensembles (Orchestra of La Scala of Milan, Orchestra of Padova and Veneto, RAI Orchestra, to mention only a few) and they certainly find great opportunities for work, for experience, for artistic development in their contact with diverse and prestigious orchestras. But the Accademia Orchestra possesses an added value: members have a real sense of belonging and therefore take part in the work with enthusiasm, deeper involvement and great dedication. The Orchestra has performed concerts that have been acclaimed by audiences and critics, and can boast collaboration with distinguished guest soloists, like Riccardo Donati, Giampaolo Pretto, Simone Rubino and Uto Ughi.

In an innovative project introduced this year, the Accademia has begun to take music into the local schools, from nursery to secondary level, with concert-lessons. The response has been so positive that the project will be extended in the future. Teachers and students have also been offered further experiences of music at the Accademia itself, in sessions held by our teaching staff, guest teachers and the artists who are performing in the Concert Season. We are also taking music into nursing homes for the elderly in Pinerolo and San Secondo, where our students hold concerts. Still another project, Martedì Prima, consists of weekly meetings (on Tuesdays), held in a local bookshop, Libreria Volare, and is aimed at involving the public more closely in our Concert Season. Presented by musicians, music teachers and experts, the meetings provide background knowledge to the concerts scheduled for the following month, with information about the composers and the opportunity to listen to and analyse their music. Another initiative, La musica spiegata, has introduced a series of performances of contemporary music into our concert programme.