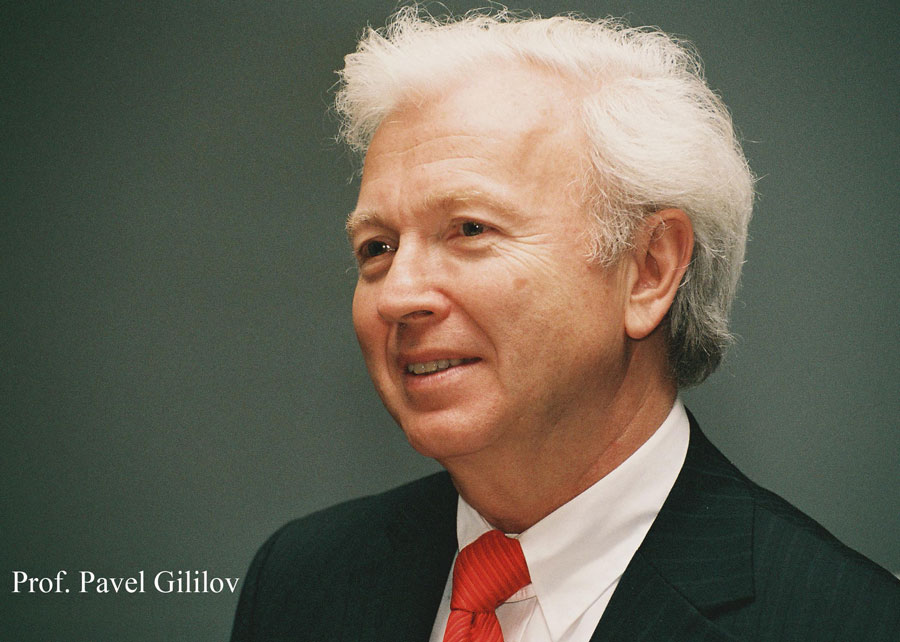 Pavel Gililov was born in Donetsk in Southeastern Ukraine where his parents fostered his obvious musical genius from a young age. The boy received his first piano lessons from his father, a music lover and amateur musician.
Soon young Pavel was playing in public. He made his first appearance with an orchestra at age eight and by his 11th year performed the third piano concerto of famed composer Dmitry Borisovich Kabalevsky with such aplomb that the grand master invited him to study in St. Petersburg (Leningrad) at an academy for highly gifted children. The school has produced such talent as Boris Pergamenschikow, Gidon Kremer, Mischa Maisky, Grigory Sokolov and many others.
During his studies, Pavel Gililov received high honors at the All-Russian Piano Competition in Moscow (1972) and the International Chopin Competition in Warsaw (1975). As his talents were recognized he became a sought after performer throughout the Soviet Union and the Warsaw Pact nations. Gililov also displayed outstanding abilities as an instructor and after his graduation in 1976 he became the youngest professor of concert piano at the St. Petersburg Conservatory.
Soon he came to detest Soviet oppression and in 1978 applied to emigrate. He first moved to Austria and then to Cologne, Germany, where he re-ignited his passion for musical instruction.
Soon after his arrival in the West, Gililov won top honors at the renowned Viotti competition in Vercelli, Italy. Thus began a new phase in his life as performer. Always in popular demand, he has appeared countless times both solo and with orchestras. He played with philharmonic orchestras from Leningrad (St. Petersburg), Moscow and Warsaw; with the Polish Broadcast Orchestra, the Philharmonia Hungarica, the Vienna Symphony, the Netherlands Philharmonic Orchestra, the Berlin Philharmonic Chamber Orchestra, Cologne’s Gürzenich Orchestra, RAI- Turin, the Irish National Orchestra and the Detroit Chamber Orchestra. He has worked with such renowned conductors as L. Foster, A. Jansons, V. Gergiev and J. Conlon. In his musical travels Gililov has visited many of the world’s cultural centers, playing in the Berlin Philharmonic, the Alte Oper in Frankfurt, Vienna’s Musikverein, La Scala in Milan, Madrid’s Teatro Real, the Palao de la Musica in Barcelona, the Concertgebouw in Amsterdam, Zurich’s Tonhalle, the Palais de Beaux-Art in Brussels, the Teatro Cologne in Buenos Aires and countless others.
Pavel Gililov’s recording career includes albums and CDs for Deutsche Grammophon, RCA Victor, Toshiba EMI, Virgin and Orfeo to name a few. His discography provides a mere sampling of the wide-ranging talents of this versatile and vastly accomplished musician.
He is also an honored guest at major festivals such as Edinburgh, Newport, Schleswig Holstein and Rheingau; at the Salzburg and Ludwigsburg Festivals and many more. He enthusiastically pursues projects with contemporary composers and has premiered many of their works. In addition to his solo concerts, he is a lover of chamber music. Along with his schoolmate and friend, the late Boris Pergamenschikow, he created a duo that gained international renown. He also founded the Gililov Piano Quartet (formerly the Philharmonic Piano Quartet Berlin).
Despite his hectic concert schedule, he continues to guide and instruct promising young musicians. He is a Professor at the Cologne University for Music and Dance, and at the Mozarteum in Salzburg where he has instructed a long list of international award-winning musicians. Many of these have gone on to stellar careers. Pavel Gililov travels the world giving masterclasses to young pianists and for years has supervised the Summer Academy in Lausanne. In addition, he is a jury member in many international competitions.
In 2005, Pavel Gililov founded the Telekom Beethoven Competition in Bonn where he is currently artistic director and jury president.