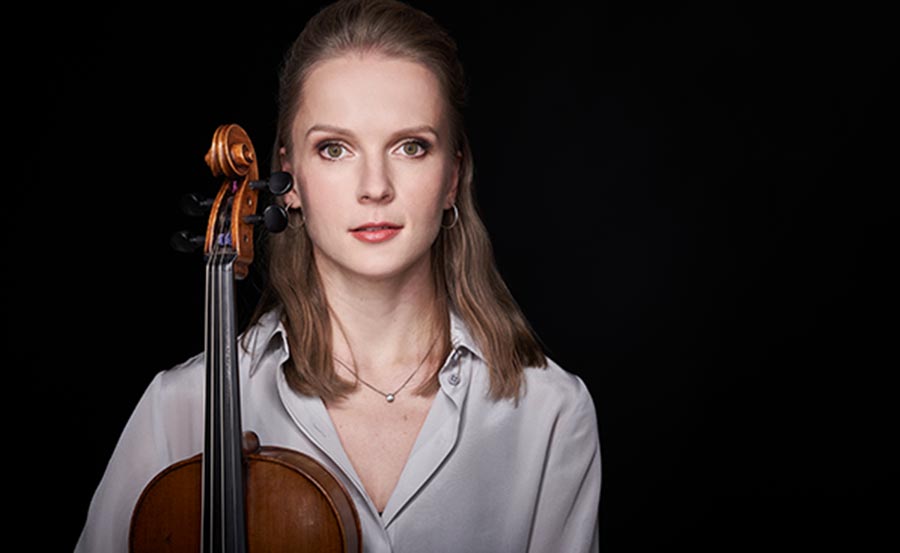 Liisa Randalu is the violist of the Schumann Quartett, winner of the Schubert Competition Graz 2012, the 1er Grand Prix of the “Quatuors a Bordeaux” Competition 2013, the Jürgen-Ponto-Prize 2014 and the BBC Newcomer Award in 2016. Since 2009 the ensemble is Artist in Residence with its’ own series “Erstklassik” at the Robert-Schumann-Saal in Düsseldorf.

Since 2016 the Quartet is artist of the Chamber Music Society of Lincoln Center in New York and performs regularly in the USA. Also in 2016 the Schumann Quartett was Artist in Residence of Schloss Esterhazyin Eisenstadt which included commissioning a String Quartet by Helena Winkelman which was world premiered there. Their musical partners are Menahem Pressler, Sabine Meyer, Kit Armstrong, Andreas Ottensamer, Albrecht Mayer, Alexander Lonquich and Nicolas Altstaedt, to mention a few.

The Ensemble plays regularly at halls like the Concertgebouw Amsterdam, Wigmore Hall London, Konzerthaus and Musikverein Vienna and also at all major renown Festivals in and outside of Europe. Their CD “Landscapes” got the German Record Critic’s Award 2017. In 2018 the Album “Intermezzo” was published, together with soprano Anna Lucia Richter. The newest recording “Chiaroscuro” of the Schumann Quartett is released in May 2019 and includes works by Mozart, Glass, Shostakovich, Mendelssohn, Webern and Janacek. The Schumann Quartett is being represented by the Impresariat Simmenauer in Berlin.

Liisa Randalu was born in Tallinn/Estonia and grew up in Karlsruhe/Germany, where she started playing the violin. After studying the violin in Stuttgart for two years, she continued her studies on the viola in Frankfurt am Main with Prof. Roland Glassl and later at the “Hanns Eisler” in Berlin, with Prof. Friedemann Weigle (former Artemis Quartet). She also studied String Quartet and Chamber Music at the HfM in Cologne with Prof. Harald Schoneweg (Cherubini Quartet) and at the Reina Sofia School of Music Madrid with Prof. Günter Pichler (Alban Berg Quartet).

As a soloist and chamber musician Liisa Randalu won several international competitions and played with orchestras such as the Estonian National Symphony Orchestra, the Tallinn Chamber Orchestra, the Deutsche Streicherphilharmonie, the Symphony Orchestra Bern, the Camerata Salzburg and the Bamberg Symphony Orchestra. Liisa Randalu is the violist of the Albrecht Mayer Quartet and plays regularly concerts in this formation. A recording with Deutsche Grammophon is planned for the upcoming season. Furthermore she is a guest teacher since 2016 at the Estonian Academy of Music and Theatre and teaches also at the Feuermann Conservatory of the Kronberg Academy. Liisa Randalu plays on a viola by Jacobus Stainer (Absam) from 1660.